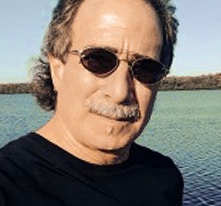 Joe has been a private consultant in deaf-blindness education for over 35 years, with expertise in Orientation and Mobility techniques for the deafblind and blind. He has also been a designer of tactile maps since 1990.

This work has taken Joe to Latin America, Europe, and Asia. In 1990, he launched InTouch Graphics, designing tactile-visual maps following an inclusive and universal design philosophy. In the years that followed, InTouch Graphics became a leader in tactile mapping and has since delivered hundreds of tactile maps to universities, transit venues, schools for the blind, museums, and other venues. InTouch Graphics is partnered with ClickAndGo Wayfinding, combining the two companies’ products to provide powerful navigation solutions.

The individuals Joe has had the honor to teach over these past 3 decades have been inspiring. He has been humbled by their courage and determination to overcome overwhelming daily obstacles as they seek to broaden their independence and live their lives with dignity.

Junn is a life-long artist and designer and has been freelancing for the last 20 years for a variety of companies. He specializes in map creation, but has a wide range of experience designing different types of graphics including logos, banners, ads, corporate ID, etc.